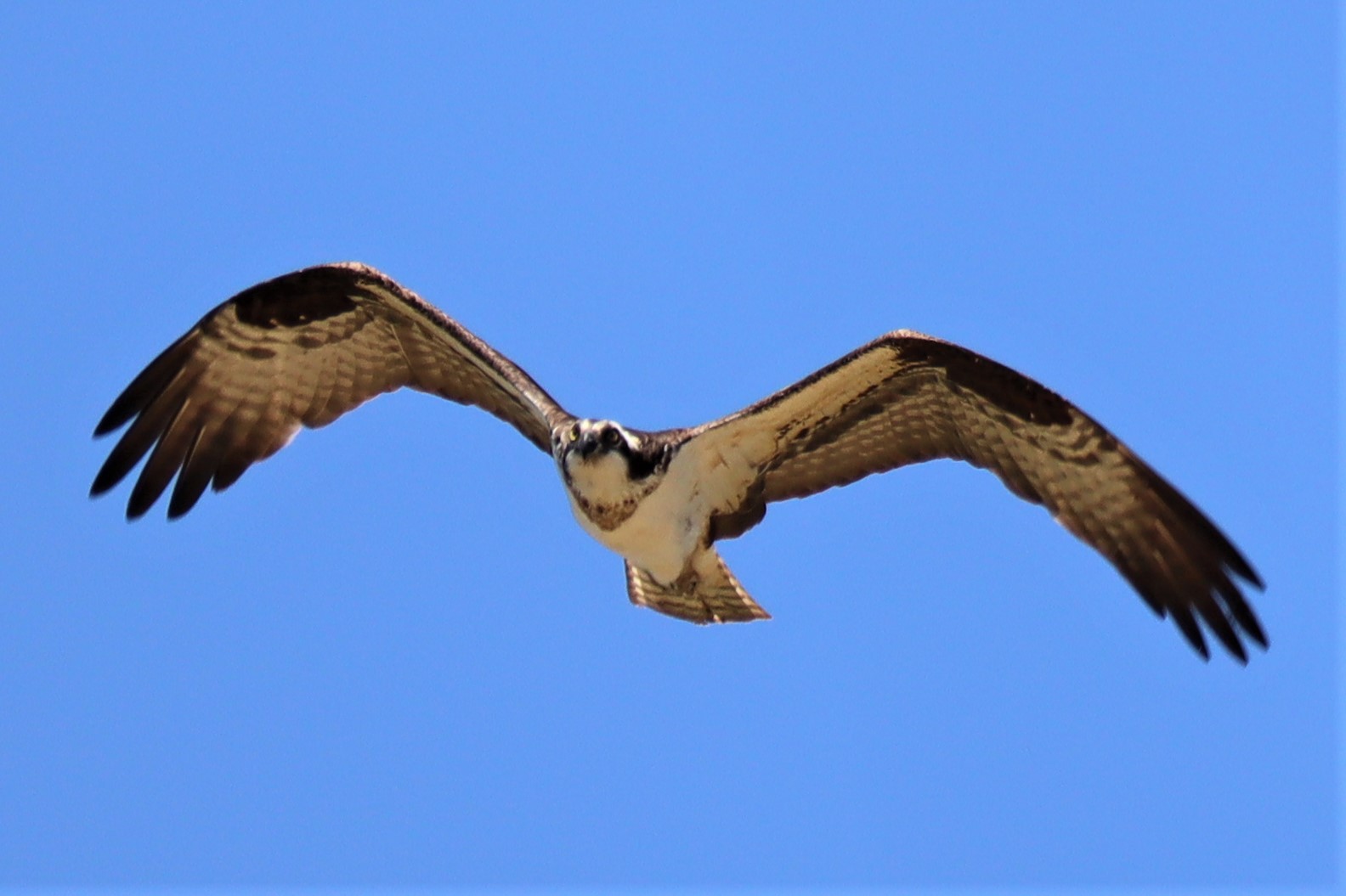 Roseburg is extremely fortunate to have Osprey living in our town!  These majestic birds can be easily seen at two local locations. Recently, nestlings, or baby Osprey, have been born at the nest structures at Legion Field in Stewart Park and Gaddis Park ballfields. Kris Ammerman, Program Manager for City of Roseburg Parks and Recreation, says, “This allows park-goers to view the birds in an urban setting.”

Osprey often try to nest on light posts and that can be dangerous. Diana Wales, President of Umpqua Valley Audubon Society, explains, “Both nest structures were built as a cooperative effort by Pacific Power and the Roseburg Parks Department after Osprey built nests on the nearby baseball field light structures, which create risks for both the birds and ballplayers.”

Ammerman said that the City would not have been able to provide the Osprey platforms without the cooperative efforts of Umpqua Valley Audubon Society, Pacific Power, Umpqua Valley Cal Ripken, and the Roseburg American Legion Baseball Commission. He added, “They have been great to work with.”

The Ospreys seem to consider these platforms to be a superior location for their nests.  However, there is a concern that they might return to the light posts. Ammerman says, “We are still working with the Audubon Society and the leagues to put deterrents up on top of the light poles to prevent nesting.”

According to the Oregon Department of Fish and Wildlife, this bird of prey has dark brown feathers above and white feathers below with a white head and a prominent dark eye stripe. While flying, they have crooked wings,  which is a distinctive characteristic. The Osprey’s call is a series of loud, sharp whistles. Like most raptors, female Ospreys are usually larger than males. The maximum life span of Osprey in the wild is estimated at 25 years. The citizens of Roseburg get the unique experience to watch the baby bird’s life cycle.

About 35-40 days after the babies are born, the mother Osprey leaves the nest more often to perch nearby and occasionally share hunting duties with the male until the chicks are able to fly. Osprey babies often start to fly 15-20 days after their mother leaves, around late July or early August. The babies come back to their nest for food for many weeks. This process is called fledging. During this, they are about the size of their parents. This means that the community will soon have a spectacular opportunity to watch the fledglings learn to fly!

ODFW says that about 98 percent of an Osprey’s diet is comprised of fish. Osprey dive feet first for fish. Two Ospreys raising a nestling consume around 375 pounds of fish during the nesting season. Luckily, both these nests are located near the plentiful Umpqua River. If you visit the Umpqua often, you might get to see these amazing hunters in action.

Osprey can adapt to many things, Wales clarifies, “ In a natural environment, they’d be building nests in the tops of snags.  These birds have found a good stretch of river with fish to feed their young, but no snags.  So, they’ve figured out that light poles might work, but these platforms work even better!  So, they’ve adapted.  Some lessons we can learn from these birds!”

However, one thing they can’t adapt to is the dangers of discarded fishing lines and lures. This can be extremely dangerous for not just Osprey, but for many other fish-eating animals. Currently, at the Legion Field nest, fishing line and a bobber can be seen hanging from the nest.

Another concern, Wales added, “Osprey also can be adversely impacted directly and indirectly by whatever flows into the water – pesticides, heavy metals, etc. – because these materials can become concentrated in the fish that the Osprey then eat and feed their young.”

In addition to building the platforms, being a good neighbor to this stunning raptor means being aware of what is going into our waters and being responsible for our fishing materials. William Cannaday, Wildlife Biologist for the ODFW says, “My favorite thing about Ospreys is that they have thrived by persistently doing what Ospreys do, despite all of the obstacles that people and progress has thrown their way.”

Observing the osprey gives us an opportunity to learn about them.  However, there is a way to make the nests more educational. Wales says that one way that we could spread awareness about the Osprey is to install an informational sign near the base of these nests.  Increasing education and interest in these birds could help ensure that future generations continue to protect and help the amazing Osprey.