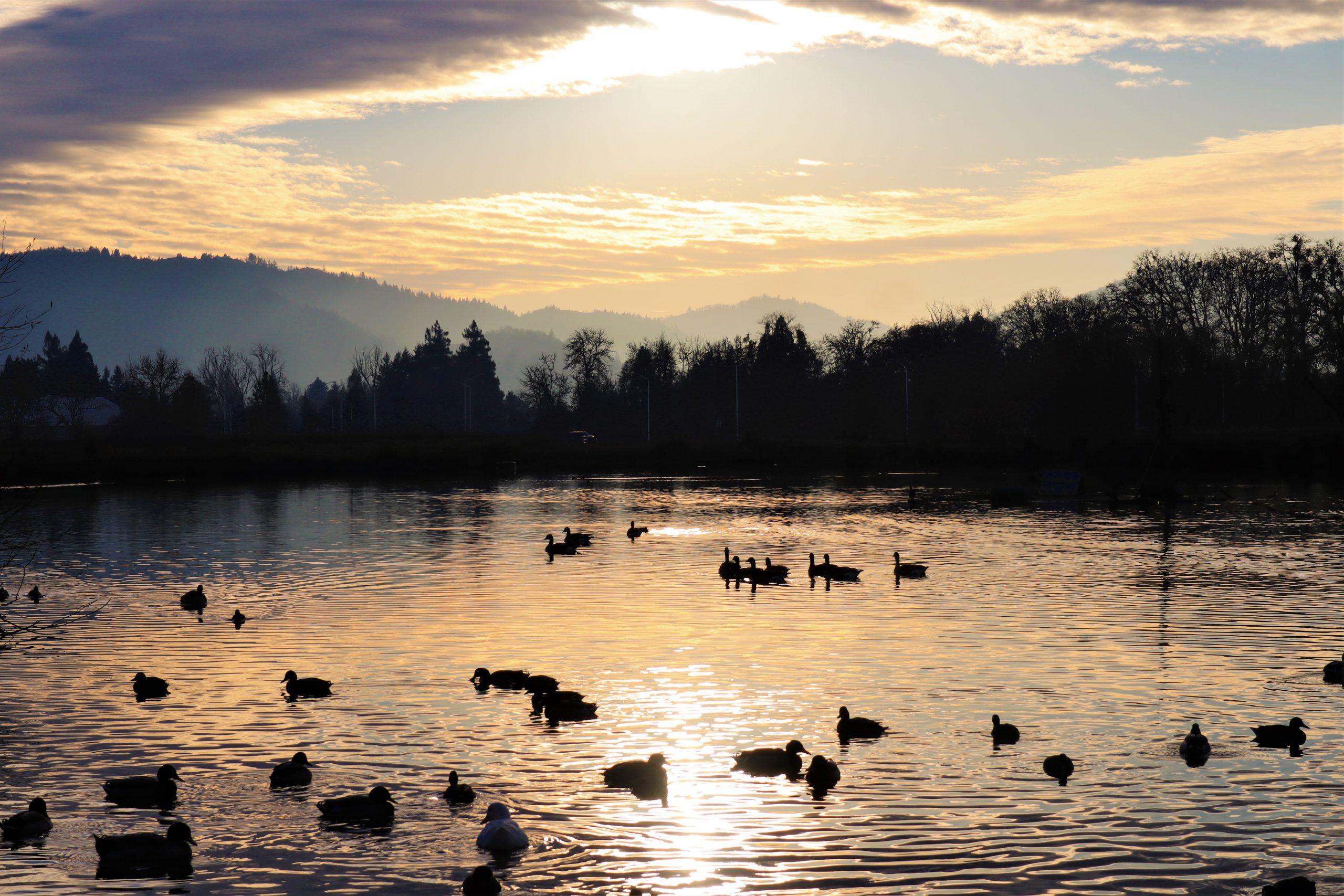 Pond closest to Fred Meyer near sunset, filled with birds on Wednesday.

The Stewart Park Nature Area is being remodeled.

“The area is getting a facelift including the new kiosk and additional educational signs to promote healthier (preferably no) feeding by the public. In coordination with these improvements the park maintenance staff is also making some landscape improvements; bringing in topsoil to replace years of erosion, adding irrigation, native plantings,” said Kris Ammerman, program manager for City of Roseburg Parks and Recreation.

Diana Wales, president of Umpqua Valley Audubon Society, said, “Two big changes are that the ponds have become much more shallow and the area around the ponds – particularly the side nearest Fred Meyer – has been degraded.  The ponds have become more shallow primarily due to silting in over time and damage done to the banks by nutria (an invasive, non-native species).  The degradation of the shoreline is due primarily to too much human activity too close to the waterline.  This causes lots of water quality issues (and additional siltation) which is very detrimental to wildlife.”

The remodel aims to address many of these issues.

It isn’t just a duck pond. A remarkable amount of birds visit it.

Matt Hunter, consulting wildlife ecologist and Umpqua Valley Audubon Society member, said, “At least 179 species have been recorded for all time, but on an average day there are perhaps 30-60 species present.”

The nature area is also home to other animals, such as nutria, frogs, turtles and dragonflies.

A new kiosk has been constructed to soon house signs that tell the public about the different types of wildlife at the Stewart Park Nature Area.

Two signs have already been put up, with more to come. The signs address that it is unhealthy to feed ducks.

Wales said, “Partly, it’s bad for the birds directly – causing disease (due primarily to too many birds in too small an area with an accumulation of waste and decomposing food) and deformities (angel-wing). But it’s also harmful to the birds and all the wildlife because it causes the water quality to be bad.”

Ammerman said four more of those signs will go up shortly and will be spaced evenly throughout the parking area.

“The inspiration for these signs and really all of the improvements that are going on came from Diana Wales,” Ammerman said. “She was instrumental in getting the right people together to make all of this happen; herself, other members of the Umpqua Valley Audubon Society, Leila Goulet with the Wildlife Safari Conservation Committee, the Oregon Department of Fish and Wildlife, and City of Roseburg Parks staff.”

The area was set aside in 1975 through a partnership with ODFW, The Audubon Society, and the City of Roseburg. This was to focus on enhancing wildlife. A nature trail has been developed over the years for visitors to enjoy the area. There is an outdoor classroom at the north end of the site to educate the public on the species.

It is hoped that many people will enjoy the environment at Stewart Park.

Wales said, “Urban natural areas give us a chance to ‘get out in nature’ without having to drive too far, get a bit of exercise, and appreciate the beauty of the world.”

It is essential to know how to enjoy the area and the birds. Ammerman said, “We want the public to know that they are loving the area to death. Daily feeding causes overpopulation, which results in poor health, poor water quality, habitat degradation, etc. This sign project is an attempt to educate folks so that they can make informed decisions that will positively impact the nature area. The best and easiest thing for the public to do is to keep wildlife wild by observing from a distance.”

This goose has angel-wing, a condition caused by overfeeding, which prevents it from flying, on Wednesday.

A new sign that encourages the public not to feed the wildlife.

A sea of ducks near Fred Meyer’s in the SPNA on Wednesday.

Two ducks swimming side by side in a pond at SPNA on Wednesday.

A duck splashing in the water at the Stewart Park Nature Area on Wednesday.