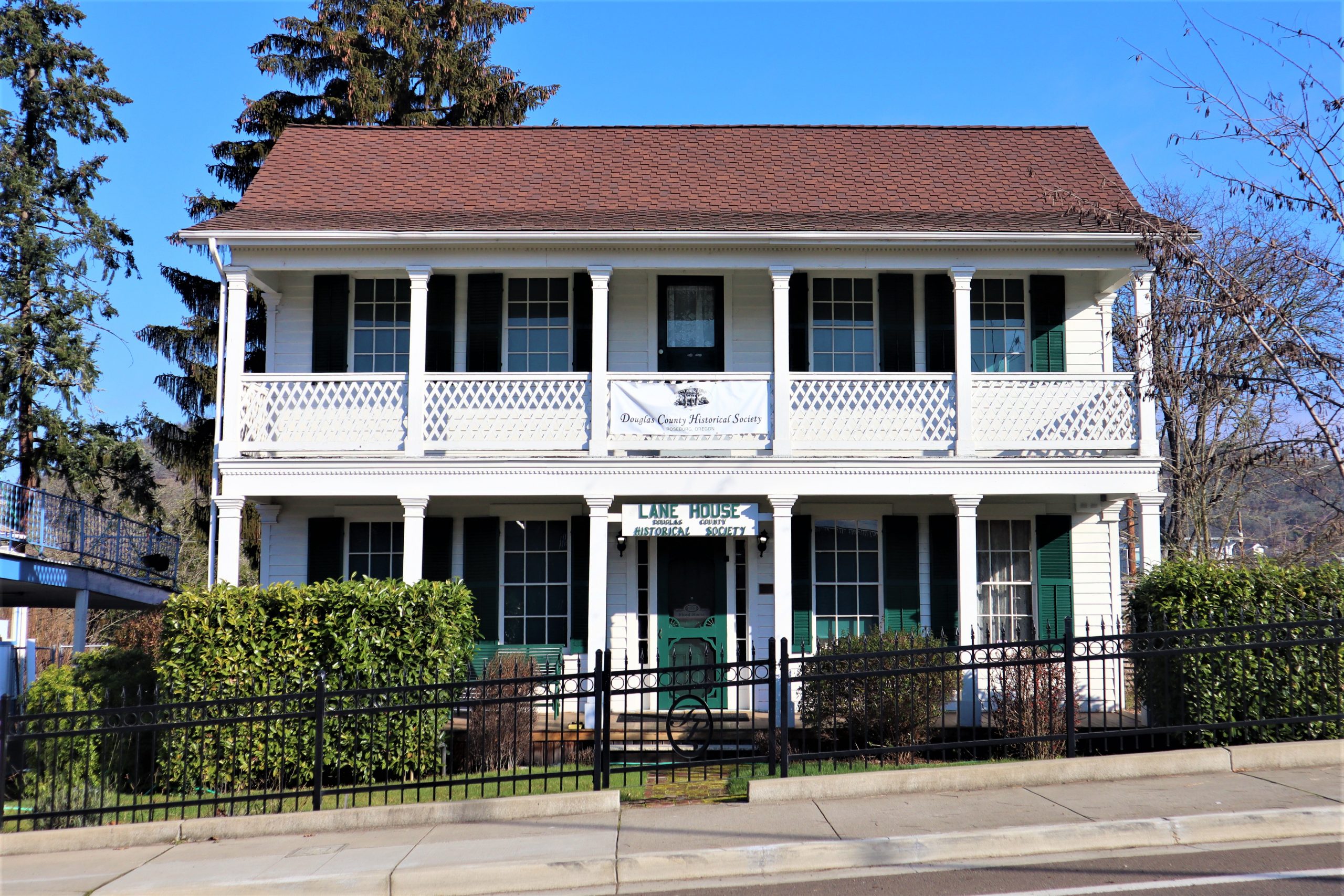 The front view of the Floed-Lane House.

The Floed-Lane House, located in downtown Roseburg, is a historical house. The house was bought by John and Emily Floed in 1866. It stayed in their family until it was deeded to the Douglas County Historical Society in the early 1960s, by Katherine Waite Bain, a descendant of Gen. Joseph Lane. The house contains items from the Pioneer and Victorian eras, such as quilts and pillows, musical instruments, and antique appliances. Many of the items were donated by Lillie Lela Moore. Free tours take place from 1 to 4 p.m. Sunday.

The house was constructed in the mid-1800s. Dale Greenley, vice president of the Douglas County Historical Society and editor of the Umpqua Trapper, said, “The Floed-Lane house was partially constructed circa 1860 by brothers Solomon and Hyman Abraham, prominent Roseburg businessmen of the era who bought the property from Roseburg founder Aaron Rose.”

In 1866, the Abraham brothers sold it to John Creed Floed and his wife, Emily. Emily was the daughter of Gen. Joseph Lane.

The Floed’s completed the construction of the house as it is seen today. They later sold it to Emily’s brother, Simon and Catherine Drain Lane.

The house was then sold to Douglas and Eva Lane Waite, according to Greenley. “Ownership passed to their daughter Katherine, the great-great-granddaughter of Joseph and Polly Lane, and her husband, Walter Bain,” Greenley said. “The house has survived basically unchanged for nearly 155 years.  In the 1959 Blast, a row of railroad cars deflected the shock wave that would have destroyed the house, but it still suffered extensive roof damage, and all the windows were blown out.  The Bains owned it at the time of the blast, then a year later, donated it to the DCHS.”

Aaron and Sarah Rose, founders of Roseburg, were the original owners of the property.

Aaron Rose and his first wife, Minerva, brought their family from Michigan in 1850 and took a 640 acre donation land claim at the mouth of Deer Creek.

Greenley hopes to make the public aware of the house and its position in Roseburg’s history. The house is currently owned by the Douglas County Historical Society. It is also the society’s headquarters.

“Too many local people have moved here over the years, and I feel the DCHS has not done an adequate job of getting our name out there. I’d like them to know that we welcome new members and hope that they will join us,” said Greenley.

Besides managing the house, the historical society also publishes a quarterly booklet of Douglas County history called the Umpqua Trapper.

“The Trapper has been in continuous publication since 1965 and comprises about 120 issues, which contain a wealth of Douglas County history,” Greenley said. “A recently completed index now makes the Trappers a valuable, researchable source of information about Douglas County places, people, and things.”

If you like to learn about Roseburg’s history or the Floed-Lane House, the Douglas County Historical Society might be for you.

Greenley said, “Joining is the best way to help. You can also help spread the word about what we are doing and why we are doing it. Membership dues help pay the bills, but it is donations that allow us to maintain the house.  We can use, and fully appreciate, every donation we can get.”

Books and a bookcase that belonged to the Lane Familly.

This beautiful, functioning piano is the first item you see when you enter the Floed-Lane House.

A surplus of items, both from Lillie Moore and the Lane family are on display.

The Lane family never wasted anything, and they even used newspaper scraps for shelf lining.